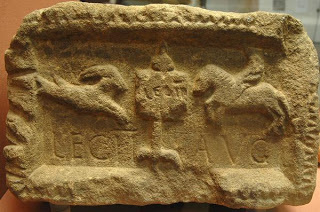 Capricorn: emblem of Legio II Augusta
BC 2000
The prehistory of South West Dorset is poorly understood. There is evidence of a local Bronze Age population. Some of them (probably their leaders) were buried in mounds on top of Golden Cap. Their settlements would have been in the valleys – perhaps here in Stanton St. Gabriel or in Chideock. At that time the landscape was probably dominated by oak wildwoods and the sea lay perhaps a mile further away than it does now.

Charcoal was found in the burial bounds – it was used to smelt tin and copper to make bronze.

BC 500
By this time some of the wildwood had been cleared (the wood was burnt for charcoal and the cleared land became available for growing other crops or for pasture).

AD 43
After the Roman invasion, Legio II Augusta (the 2nd Augustan legion) advanced along the channel coast – intent on bringing every little port and inlet under their control. In Dorset they met stiff resistance from the Celtic inhabitants, but the Romans were better equipped and supplied and had long experience of siege warfare.

The route of the Roman Road from Eastern England to Exeter this side of Bridport is not known. It probably went different ways at different times. But Roman roads probably passed through Chideock, over Stonebarrow and past Hogchester Farm near Charmouth. Less than a mile away, the name Coldharbour suggests a Roman settlement, as do clumps of sweet chestnut trees on Stonebarrow. Roman soldiers must have visited Stanton, clattering down the road from Morcombelake or out of Chideock, along Pettycrate Lane, round Langdon Hill and down the deep cut track behind the chapel. But West Dorset “remained a backwater as far as the civilising influence of Rome was concerned.” 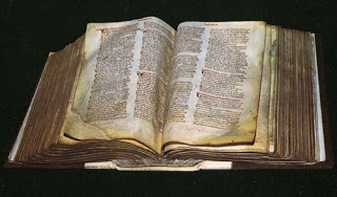 Domesday Book
1066
Sometime in the 20 years after the Norman Conquest, William I gave Stanton to his brother, the Count of Mortain. Domesday Book records a manor here, 12 farms and at least 400 acres of arable land.

1240
There is the first written record of the chapel at this time and evidence that the population was high and the village flourishing. There were now around 30 farms in the area.

1348
The Black Death heralded a time of falling population and increasing poverty in many places. With its access to the sea and fish, Stanton may have been spared some of the hunger experienced elsewhere.

1558
Open fields in neighbouring Chideock were enclosed by the lords of the manor, leading to the loss of common rights and hardship for many ordinary people. The same probably happened at Stanton.

1642
The start of the Civil War began a time of new uncertainty in the area, which had already suffered because it was a bastion of Roman Catholicism at a time when that faith was forbidden. Land changed hands frequently; buildings were destroyed in the fighting or razed to the ground as a punishment and a warning to others. By 1664 there were only 15 farms in the area.

1750
The start of more enclosures and the beginning of the disappearance of many of the orchards in the area.

1796
9lb cannonStart of the Napoleonic War, which meant the construction of a Signalling Station on the top of Golden Cap, which afterwards became a Preventive Station for the use of Customs Officers in their struggle to control smuggling in the area. A report of the time said that a 9lb cannon and a small watch-house was needed here to defend this section of coast from a Napoleonic invasion.

Around this time, the chapel fell into disrepair and most of the remaining population moved away, leaving only the farmsteads and continuing smuggling.