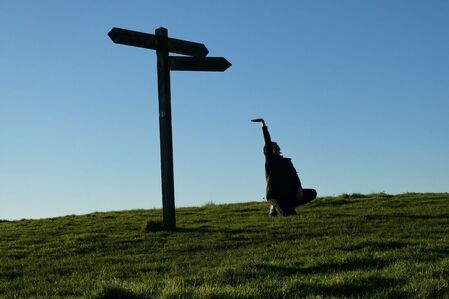 Background
My proposed score seeks to explore within the conference wider questions of how we can constantly include and amplify the affective, visceral, somatic and embodied responses as equal contributions within (cognitive) narratives of climate change? As the urgency of the situation drives activists faster and faster often towards burn out, the non-verbal realms are often seen as somewhere to rest and to recuperate in the name of regeneration before and after discussions. How can this change so that these realms are actually presented and respected as contributions within climate debate and discussion?

My questions are stimulated by and accompany the concerns of the cultural historian Morris Berman who analyses through history the displacement of the life of the body in favour of ideals (Coming to Our Senses: Body and Spirit in the Hidden History of the West, 1989). He maintains that we avoid embodiment so that we do not have come "face to face with the immense yearning that underlies the need for paradigm itself" (p.307). I see this as a present danger: that greenwash is flooding our global north, rooted in its capitalist and colonial histories, as the planet gasps, so that embodied responsibilities can be avoided.

I am influenced by Tim Ingold’s notion of "a practice of correspondence": "the way in which difference continually arises from within the midst of joining with, in the ongoing sympathy of going along together".
​
Paula Kramer speaks of dance as a practice ground for philosophy and living and has elaborated the notion of "being differently social" (Dancing Materiality, 2015) which feels relevant here. And by responding to what is already occurring  in transitional spaces, I seek to come closer to  Kate Soper’s  idea of "alternative hedonism" as a way of encouraging us to embrace ‘making less’ our consumerist tendencies and to Miriam Meissner’s argument that "a framing of lifestyle minimalism in terms of anti-accumulation – rather than in terms of de-cluttering, simplicity and others – could potentially serve its politicization towards a more progressive, collective and politicized de-growth movement agenda."('Against Accumulation', Journal of Cultural Economy, 2019)